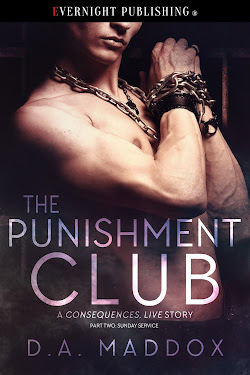 At Huntington Regional Detention Center, the time has come for the four freshman pledges of the Punishment Club to complete their sentence. Their final day in the Controlled Judicial Humiliations Program will take them to the outermost limits of their endurance. They will be tested by torment, scourged with shame. For Emma Jo and Buddy, for Peter and Cassidy, only love can temper the agony of their discipline—and only friendship can give them the strength to deliver a little justice of their own.

Buddy watched them come for him—and for Emma Jo. He moaned at their approach.

It didn’t even slow them down. They were on him in seconds.

“Buddy!” one woman squealed, arms flailing harmlessly everywhere but on him. “Gosh, you’re so cute!”

Nurse Reyes-Garcia gave him a stern look, and Buddy knew. He could not disappoint Matron. He had to be polite. “Thank you, miss,” he said, watching her watching him.

“Loved the shaving episode, hon,” an older woman said, tracing her finger up and down a smooth, denuded armpit. “You were so hairy. So much better now. God, you’re scrumptious, and—and I feel so bad for you…”

It was the first touch.

His hand went under, tickling Buddy’s testicles. Buddy couldn’t speak. A woman who’d shared a most pleasant exchange with Miss Ronnie was thoughtfully handling his shaft at the same time, rolling the foreskin back and forth as though considering the real thing against its image on television.

“It is okay if it is something else altogether,” the man continued, tracing his finger over the ridge that bisected Buddy’s swelling balls. “I am only curious so that I can use that when I pleasure myself this evening. I would love to know your worst thing. Please and thank you.”

“The worst…” Buddy said, considering, eyes rolling around in his head, wondering how soon it would take him to blast off right here. “The worst … was … stripping … by myself… first night … before anyone else…”

Hands. His chest. His navel. The back of his neck.

“Yes. Yes, I understand. Thank you, Buddy. That works for me.”

At the post with his poems, another of his admirers studied the writings from a safe distance, happy to see it in person and not touch it while she stroked his rib cage with one hand.

“Everybody loves you, Buddy,” said the girl at his cock. “No one would ever hurt you.”

Buddy tried for a conversational tone, a line Peter might use were he a character in one of Buddy’s stories. “Well, ah—urrggh. I mean, arr… Yeah, kind of … depends on how one … defines … the word … hurt.”

He shot his first load into her hand, three quick, blinding spurts that could not be contained any longer.

She licked her fingers and said, “Mm. Buddy.”

“Can we turn her?” asked a boy who had to be at least twenty-two years old, under law, to be here. He looked, with his mop of corn-colored hair and his freckles, no older than nineteen.

“Certainly, you may,” Officer Garcia said with a stiff but friendly bow. “You recall the diagram?”

It was difficult for Emma Jo to focus on her sympathy for Buddy—her empathy for all of her friends, which must surely be down there in her heart somewhere—while the creepy-ass man with long white hair ran his hands together up and down her bare left arm, wrist to pit, tubing it over and over again. Who the fuck got off on arms?

And then there was the more studious pair of women introducing themselves to each other at her vagina, poking at it, gently pulling it at the lips as though testing its springiness. One finally addressed her directly, just as the young man was pulling the small release pins from the support struts.

“Why did you want to cover this up with so much hair? It’s only the best vagina ever!”

Emma Jo raised her eyebrows. Strangely pleased with herself, she said, “Oh—um. Thanks for that. I—I don’t know? Have to think on that one…”

The X-frame swung slowly and smoothly forward—or the top of it did, while her feet swung out the other way behind her. She supposed, as she and the frame flattened out to a horizontal line, her eyes facing the floor, the young man could have locked it there. But he kept guiding her, one hand on her leg, the other sparing her hat from dropping into the bucket by taking it off her head.

Until she was upside down, legs wide, with the young man’s face millimeters from her sex.

“No licking?” he plaintively asked, as though it wasn’t the first time.

“No. Licking,” Officer Garcia said firmly, making the two words individual sentences. “You know what you are and are not allowed to do.”

Emma Jo felt him nod—because his prominent chin was nestled on her slit.

Greasy hair hanging practically right into the soapy water bucket, Emma Jo heard the pins go back into place. And even though it was her head, not her pussy, directly over the steaming water, her sex heated further as the man massaged it with his chin back and forth, back and forth…

It was so weird, so unexpectedly hot…

Mom? she thought. Dad? You know, just sayin’, there are some fucked up people in this world. Could’ve warned me.

The creepy white-haired dude was tubing one of her legs now. He never said anything.

Meanwhile, the vagina conversationalists struck up a new topic: Emma Jo’s tits, which they handled curiously and poked at, one after the other, taking turns at each nipple.

Emma Jo closed her eyes and felt her first fluids begin to run.

It seemed there was no end to them. Wave after wave they surged into the room, one crowd after another. Their hands became a blur. Their explorations melded to a single sensation. It was her body, but they were all a part of it. Cassidy had no tears left in her.

They were all so kind.

“You’re beautiful, Cassidy. Bet you get that all the time.”

From Cassidy: “Thank you, sir. Mostly from my mom.”

“This muscle’s all tense. It’s seriously like a knot right here. I’ll work it out for you.”

And another man. “I just have to touch it—I’m sorry. I won’t break in or nuthin’. Peter would kill me.”

She had just enough of a toe hold in reality to nod, and the world turned for her.

An hour later, the cleaning crews came in. Peter was horizontal, feeling the steam first against the top of his stomach and his sternum, spreading from there like a warm wet blanket everywhere and curling up from either side of his rib cage.

He lifted his head to get a look at them as they filed in—ten women and ten men, each equipped with a long, thick, plastic turkey baster.

“Do not worry about inadvertent splashing,” Officer Garcia said to them as they dispersed. “Our Punishment Club shall be put to mop duty before their final discipline.”

Or we could have done this in the shower room, Peter thought, letting his head hang again. Looking down the length of his body, he sent up a quick thank-you prayer that he hadn’t ejaculated into his bucket. Had Buddy?

Hands and basters in the water. The washers ignored the sponges at first. Plastic slurped up soap and water.

“How are you doing, Mr. Gravis?” Officer Garcia called over to him.

“Good, sir!” he called back, then let out a surprised grunt when a man’s hand drew his face slowly up by the hair. “Never been gang-groped by fifty people before, though. You?”

“Not since police academy.”

Then he was staring down the nozzle of the baster. The man wielding it said, “Close your eyes, son.”

Peter did, and he felt the first splash of water on his face.

Then—everywhere, four women along with the one dude, spraying him with one shot each before going for the sponges. The man went for his back, scrubbing hard and thoroughly while a heavyset woman in her thirties knelt in front of him, holding his head up by the chin and washing his hair one-handed, stopping to massage his temples one at a time. “Got to get you buffed and polished before you go back to school,” she said.

“No complaints from me,” he said, his body unclenching, even in the restraints. “Bet none of my friends back home have ever been buffed before.”

Another woman started lathering his cock. His legs bucked. Heat returned to his cheeks.

“Who’s my rubber ducky?” this new, unseen woman cooed to him in baby talk from between his legs.

Peter thought about it, eyes bulging.

Emma Jo gave up. Sure, they were strangers. Sure, Buddy was in the room. And sure, technically, this was supposed to be the final “humiliation.” She needed this. It was just what she had wanted.

Hands soaping her tits, her thighs. Wet fingers in the gaps between her toes.

And now behind the ears, both at the same time, gently. Rhythmically.

“For you, Emma Jo,” the anonymous man said, “anything.”

Emma Jo guessed he really was a fan. Weird. She’d never had fans before. She was just a dumb nineteen-year-old kid who had fucked up in her first week of college.

It felt nice, having fans.

"It’s hot. It’s kinky. It’s legal — legal punishment. Guys and gals, those of you of “transitional age,” you do not want to find yourself on Consequences, Live! But readers, it’s a steamy treat, with engaging characters, an inventive, dystopian-flavored plot, and um, wow, pretty much something for every naughty taste."
~ 5 STAR REVIEW
"EDGY AND HOT! This book blew my mind. It's sharp and shocking and above all, edgy. It has a bite of suspense that makes this particular novel the kind of read you can't put down. Highly recommended!"
~ 5 STAR REVIEW
Posted by Evernight Marketing at 12:06 PM

Three For A Girl

A Walk on the Wild Side